25 to 50 million people in the U.S. perceive some form of tinnitus. Approximately 10% of the adult population experienced tinnitus for over three months in the past year. At the ages of 65 and older even 12% of men and 14% of women suffer from tinnitus. About 16 million people try to find medical help for their tinnitus. Roughly 2 million patients claim their tinnitus notably restricts their daily life. Hence, tinnitus is a largely spread disease which affects a broad part of the population.

The causes of tinnitus are differentiated into two kinds: subjective and objective tinnitus.

Objective tinnitus can be ascribed to an internal sound source. That’s why it can be made audible and it is possible to measure it.

The subjective tinnitus is the most common form of tinnitus. Since the tinnitus-sound seems to be linked to pathological firing-patterns in auditory system it is not possible to measure any sound waves and only the affected can hear it. There is no acoustic source within the body.

Hearing noises for less than three months would be defined as acute tinnitus. This form is often suddenly cured without further treatment. Between three and six months the tinnitus is still subacute. Only when the sound lingers for more than six months is the tinnitus seen as chronic.

According to the German Tinnitus League 26% of their members name stress and another 26% loud noises as a cause of their tinnitus.

In 43% of the respondents tinnitus could be ascribed to loud noise or blast trauma.

45% of the participants, however, suffer from an idiopathic tinnitus for which no cause can be found.

Tinnitus often co-occurs with hearing problems as 2/3 of people with hearing impairments also suffer from tinnitus and 53% of the tinnitus patients complain about hearing loss, too.

Other known causes of tinnitus are, for example:

Some types of medication can cause tinnitus. There are over 200 drugs that are known for causing tinnitus perception as a side effect when starting or stopping to take them:

Tinnitus is a phantom noise that expresses itself in many different ways. The noise that one patient hears can be entirely different from the sensations of another patient. The sound and strength of the tinnitus can vary even in one patient.

It is generally described as:

A decompensated tinnitus often leads to different comorbidities. In many cases these impede everyday life and frequently cause severe psychological disorders. This can easily end in a 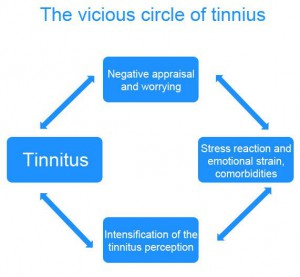 vicious cycle when negative thoughts and emotions render the tinnitus even stronger and hinder the acceptance of the disease.

Some of these comorbidities are:

The Tinnitus can either be compensated or decompensated.

Compensated tinnitus produces only little psychological strain and is bearable to the affected person.

Decompensated tinnitus on the other hand leads to pronounced psychological strain and various types of impairment. This form of tinnitus often entails multiple secondary symptoms like concentration problems, sleeping difficulties or depression. 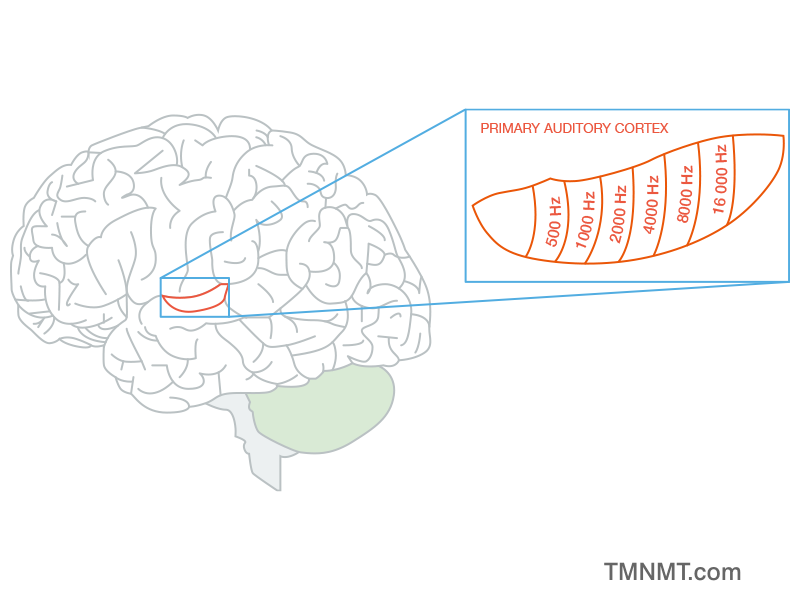 For a long time, tinnitus had been seen as an ontological disorder. Due to neurological advances, however, it is now known that the source of the tinnitus actually lies within the auditory cortex. The perception of the phantom sound can be ascribed to increased excitatory firing rates of those neurons that correspond to the tinnitus frequency. Besides, increased neuronal synchrony and expansion of the tonotopic map (see picture) within the auditory cortex can be found in patients that suffer from tinnitus. The part that represents the tinnitus frequencies expands into adjacent areas.

This new insight has driven the development of a variety of treatments focusing on the source of the tinnitus. By stimulating the brain researchers try to counteract the tinnitus-causing mechanism.