The idea of tailor-made notched music training has been researched in a variety of paradigms, which has mostly been carried out in Germany and Italy. This assortment of studies gives an overview of the mechanisms behind the training and displays the research path leading to the development of training programs.

Just click on one of the pictures below or scroll down: 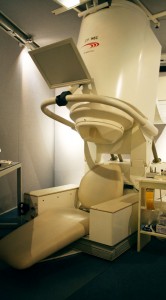 Many of these studies utilize Magnetoencephalography (MEG) to depict the neurological alterations caused by manipulation. MEG is a non-invasive functional neuroimaging technique which enables the mapping of brain activity millisecond-by-millisecond.
Neuronal activity is defined through an electrical current which generates an electromagnetic field. The magnetic field of multiple neurons can be detected by the MEG.
This technique provides not only high temporal but also very precise spatial resolution of brain activity permitting localizations with millimeter precision, thereby making it advantageous over fMRI and EEG. Besides, the MEG machine is completely silent and allows some movement of the head facilitating measurements on children.

Reorganization of auditory cortex in tinnitus.

This MEG study provides evidence that there is a link between tinnitus and plastic changes in the auditory cortex. Tinnitus patients exhibit an expansion of the tonotopic map in the auditory cortex compared to a healthy control group. This means there was an invasion of the tinnitus frequency into neighboring regions. Besides, there was a marked correlation between the experienced strength of the tinnitus and the corresponding cortical reorganization.

Subjects were asked to listen to music of which a narrow frequency band had been removed. The training lasted for three hours on three consecutive days leading to a reduced response to stimuli of the respective frequency immediately after the training. This indicates a diminished strength of the cortical source in the auditory cortex. Though the effect was no more evident the next day, the decrease became more pronounced following another training denoting a cumulative effect. This can be seen as evidence that short-term plasticity in the adult auditory cortex is possible.

Lateral inhibition and habituation of the human auditory cortex.

Okamoto et al. exposed participants to random noise and digital frequency-filtered noise of different bandwidths. The filter’s bandwidth demonstrated a significant influence on the reduction of the response to the filtered frequency. If ¼ of an octave is filtered the effect is the most pronounced. The broader the filtering, the bigger the reaction to the concerning frequency after the training. This effect can be explained by lateral inhibition.

The windowed sound therapy: a new empirical approach for an effectiv personalized treatment of tinnitus.

Participants were assigned to one of three groups which received different sound stimuli over the course of one year. The first group listened to random noise filtered around their individual tinnitus frequency. The second group obtained unfiltered random noise and the third one the sound of a waterfall. Only the first group indicated significant changes in the experienced tinnitus loudness compared to baseline.

After listening to tailor-made notched music for 12 months the subjects experienced diminished tinnitus loudness which correlated with reduced activity in those areas of the brain that are responsible for the tinnitus frequency. Besides, the participants reported lower psychological strain and constriction. None of these changes were significant in the control group who was presented with music for which its filtered frequency would change along the spectrum.
Since the decrease of tinnitus loudness and cortical activity was even more pronounced after 12 months than after six months the authors suspect a cumulative effect over time.

A short and intense training with tailor-made notched music for five days led to a significant reduction of the tinnitus loudness in patients with a tinnitus frequency below or equal to 8 kHz. Three days after completion of the training, however, the diminution was back to baseline level causing it to be insignificant again. This suggests that a longer training is necessary for persistent changes.
In the group of subjects with a tinnitus frequency higher than 8 kHz no significant changes could be found. This might be due to the characteristically low level of energy of music in those high frequencies.

Tinnitus: the dark side of the auditory cortex plasticity.

Following a 12-months training program with tailor-made notched music, subjects showed significantly reduced behavioral and physiological measures compared to two control groups listening to either placebo modified music or non-modified music. Participants of the experimental group reported diminished tinnitus loudness and lower levels of annoyance and impairment caused by tinnitus. None of the control groups experienced any significant changes. These results are in line with the findings in the primary and secondary auditory cortex showing only significant alterations in the experimental group. In addition, the reduction of the tinnitus loudness after listening to the tailor-made notched music revealed a linear relationship with the transformations in the primary auditory cortex.

For a long period of time, tinnitus was regarded as an ontological disorder. Advances in neuroimaging techniques, however, showed that overly excitatory neurons, changes of the tonotopic map and increased neuronal synchrony are responsible for the perception of the tinnitus sound. The most effective treatment for tinnitus is a multidisciplinary approach combining psychological and sound therapy. New developments try to target the source of the sound by stimulating the brain.

This study compared the cortical changes after active listening to or active playing of tailor-made notched music over a period of two months for one hour each day. While the group playing music didn’t present any differences in cortical activity, the active listening group showed a diminished response to their tinnitus frequency, but not to a control stimulus.