TMNMT is a music-based training directly targeting the source of tinnitus by reducing the increased firing pattern of specific tinnitus-affected neurons. The core principle is to filter and remove frequencies that are specific for the tinnitus of an individual person from any desired piece of music. In fact, tinnitus-related activity of neurons is suppressed by increased inhibition from neighboring neurons (lateral inhibition) while listing to such a pre-processed song. Given the lifelong plasticity of the human brain the expose to such a music-based training, applied over a certain period of time, can decrease the over-excitation of tinnitus-related activity in a sustainable manner and, simultaneously, reduces the perceived tinnitus loudness. Hence, TMNMT represents a music-based approach that aims at the very cause of tinnitus and does not only targets its symptoms. 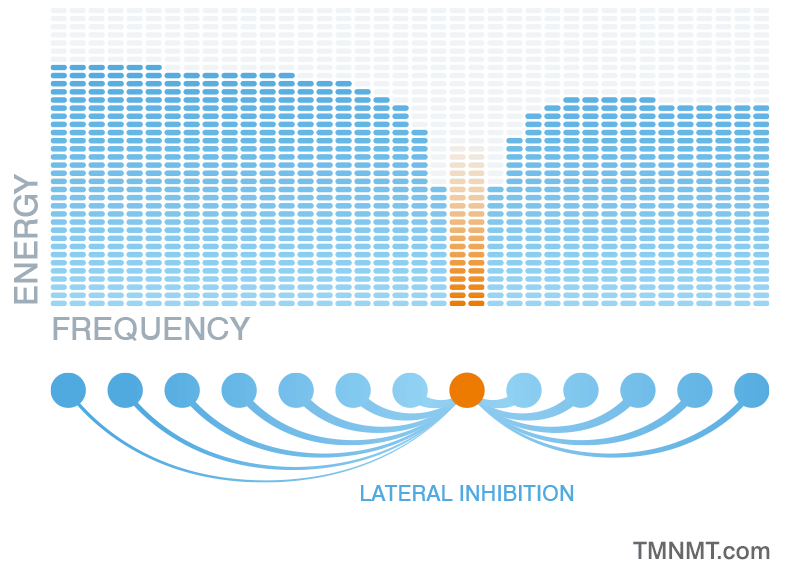 As studies have shown, the tailor-made notched music training is suitable for tinnitus frequencies which are stable, tonal and below 8000 Hz. It has proven effective for affected people between 18 and 60 years of age with a hearing impairment that is not higher than 50 dB HL. Patients that don’t meet these conditions can still give the training a risk-free trial. However, studies up until now haven’t shown significant variations of their tinnitus after listening to tailor-made notched music.
Before the implementation of the treatment the individual tinnitus frequency needs to be accurately analyzed. This is crucial for the following steps since the training is only effective when the notch is centered precisely to the tinnitus frequency.
Once the frequency is identified each patient can pick their own favorite kind of music they want to use for the training. Online software filters the individual tinnitus frequency from the music causing an audible notch in the sound spectrum of the music. However, perception quickly adjusts to the unfamiliar sound.

While listening to the filtered music the neurons of the individual tinnitus frequency experience no stimulation. At the same time, neurons that are situated right beside the notch receive excitatory input. According to lateral inhibition, the stimulated neurons exert an inhibitory influence on their adjacent neurons, namely the ones within the notch.
Owing to the lifelong plasticity of the brain this suppression of the tinnitus neurons can permanently alter their excitability. By listening to tailor-made notched music over a long enough period of time the overly excitatory neurons of the tinnitus frequency develop a diminished pattern of firing leading to a decrease in the perceived tinnitus loudness.
It is recommended to listen to the music for two hours daily for at least six months in order to obtain satisfying and long-lasting results. You can use any MP3-capable playback device with your own headphones.
In many cases patients report an intensification in the volume of their tinnitus after the first trials of listening to tailor-made notched music. This effect is generally not harmful and can be ascribed to the contrast-effect, an enhanced perception of a stimulus due to the exposure to a stimulus of the same dimension but of lesser value. The perception should disappear after a few moments.

Two main mechanisms are assumed to cause the reduction of the tinnitus loudness. 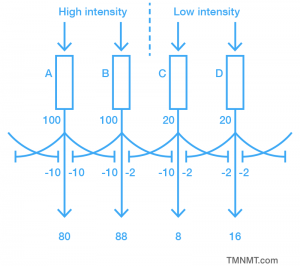 One possible source of tinnitus is thought to be overly active neurons in the auditory cortex of the brain with little inhibiting influence.
Lateral inhibition refers to the mechanism that an excitatory neuron exerts an inhibiting influence on its neighboring neurons, thus creating more distinct contrasts in stimulation and enabling increased sensory perception. This mechanism occurs not only in the auditory but also in the visual, olfactory and tactile processing. 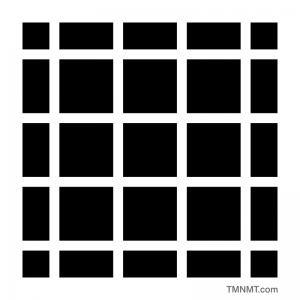 A very famous example of lateral inhibition is the Hermann grid. When not focusing on the intersections the viewer perceives gray spots appearing which are not really there. This is due to the inhibiting influence those areas receive from the surrounding white parts. The white bands, however, are adjoined by dark areas which don’t exert an inhibiting influence.
Due to the alignment of neurons according to their frequency in the auditory cortex (tonotopy) the filtering leads to an inhibiting influence on the tinnitus from the frequencies below and above it.
Neurons within the notch do not receive excitatory, rather only inhibitory influence from the neurons on the edge of the notch. This leads to a strong suppression of their activity whereas the neurons on the edge of the notch show an unchanged or even augmented activity because they obtain less inhibitory influence from their neighboring neurons. 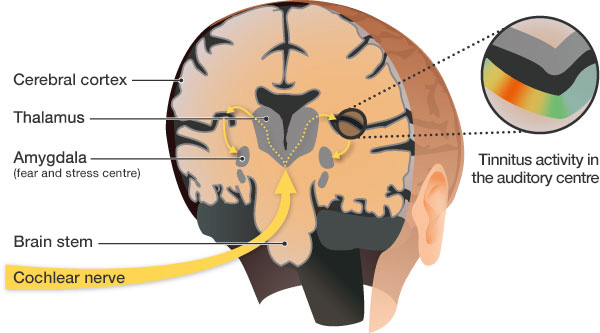 Another crucial characteristic of the brain allows these changes of neuron firing to become long-lasting, the neural plasticity. For a long period of time neural plasticity was only expected during brain development, i.e. during and after birth when neural structures are ever changing and adjusting to new sensory input from the environment. Nowadays we know that the brain preserves its plasticity all through lifetime, continuously adapting to new information and changing environments. Taxi drivers in London, for example, show an increased volume of their posterior hippocampus due to their extraordinary memory for street names.
Neural correlates of tinnitus are the pathologically excitatory neurons and the expansion of the tonotopic map in the auditory cortex. By making use of the plasticity of the brain the firing pattern of the tinnitus neurons can be persistently reduced. The consistent listening to notched music provokes the brain to re-adjust the firing patterns of the neurons and leads to a new equilibrium.